Not sure manufacturer has a website. "Founded in 2001, Shenzhen Fuman Electronics Group Co., Ltd. is a state-level high-tech enterprise engaged in the research and development, packaging, testing and sales of high-performance analog and digital-analog integrated circuits. Currently has more than 400 kinds of IC products in the field of consumption including power management, LED driver, MOSFET and so on." 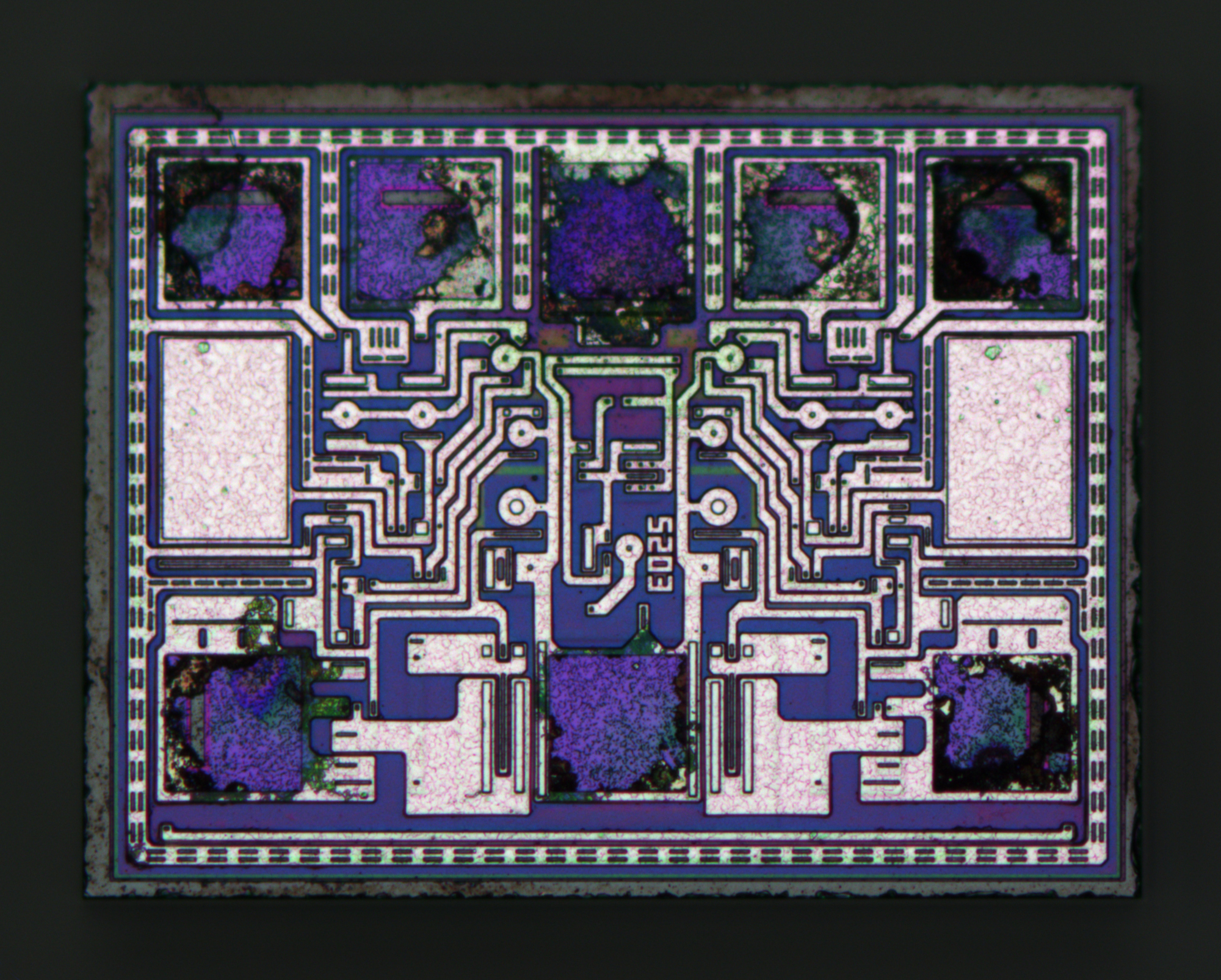 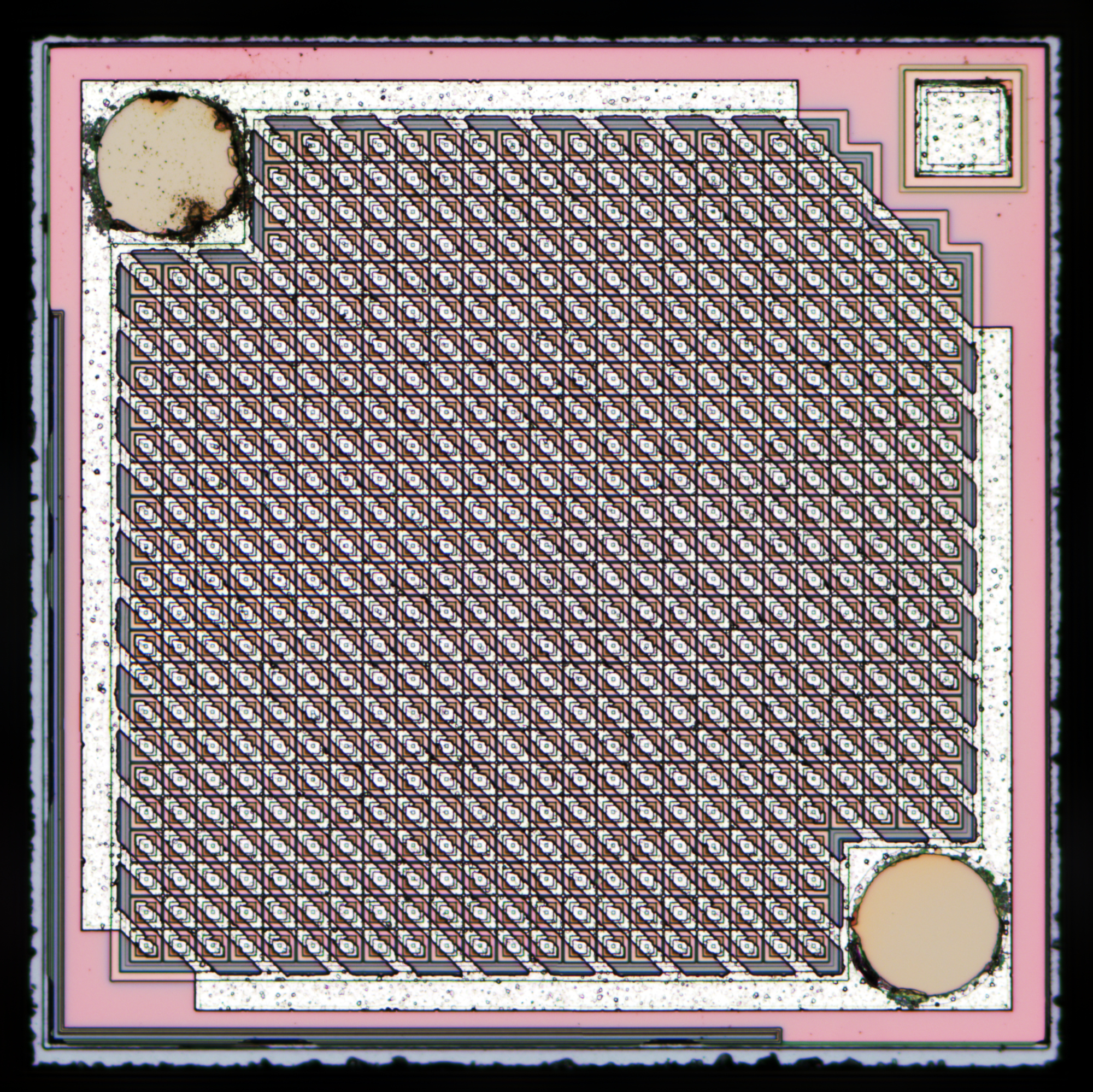 Casio F-91W is an iconic watch worn (among others) by Barack Obama and Osama bin Laden. While working on precision watch firmware (with quartz temperature compensation, aiming for error of under 10 seconds per year) for SensorWatch which is built around F-91W - I was curious to see how original chip looked like.

Surprisingly, chip is more complicated than I anticipated and digital part is less than ~50% of the die area. F-91W has trim jumpers on the PCB to adjust part-to-part variability of the quartz crystal. Looking at die complexity - it might be that they use capacitive tuning of frequency rather than skipping/adding ticks. Also, it might happen that they even have coarse/cost-efficient temperature compensation. Casio specify accuracy of 30 seconds per month, but some F-91W watches are within 6 seconds per month which requires good adjustment & luck for non-temperature compensated watch.

Latest versions of the watch work 7-10 years on a single battery, while early versions lasted "only" 2 years. While original F-91W was introduced in 1989, this die is designed in 2006. If someone has original version from 1989/early 1990's - it would be interesting to compare if it's a "die shrink" or re-design with improved performance.

You can compare die complexity to Luch quartz watch. It's not a digital watch, but see how much less analog circuitry was there. 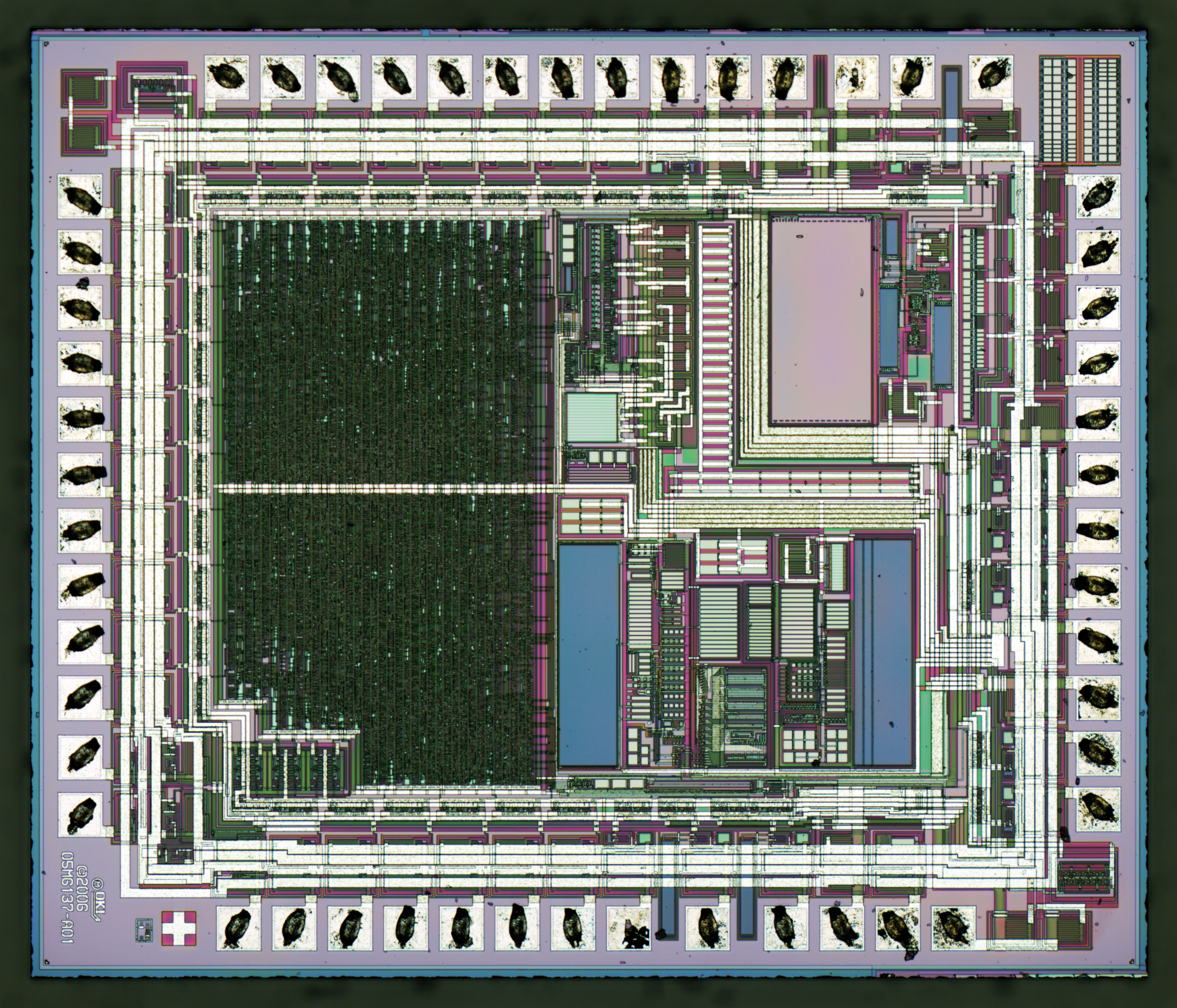 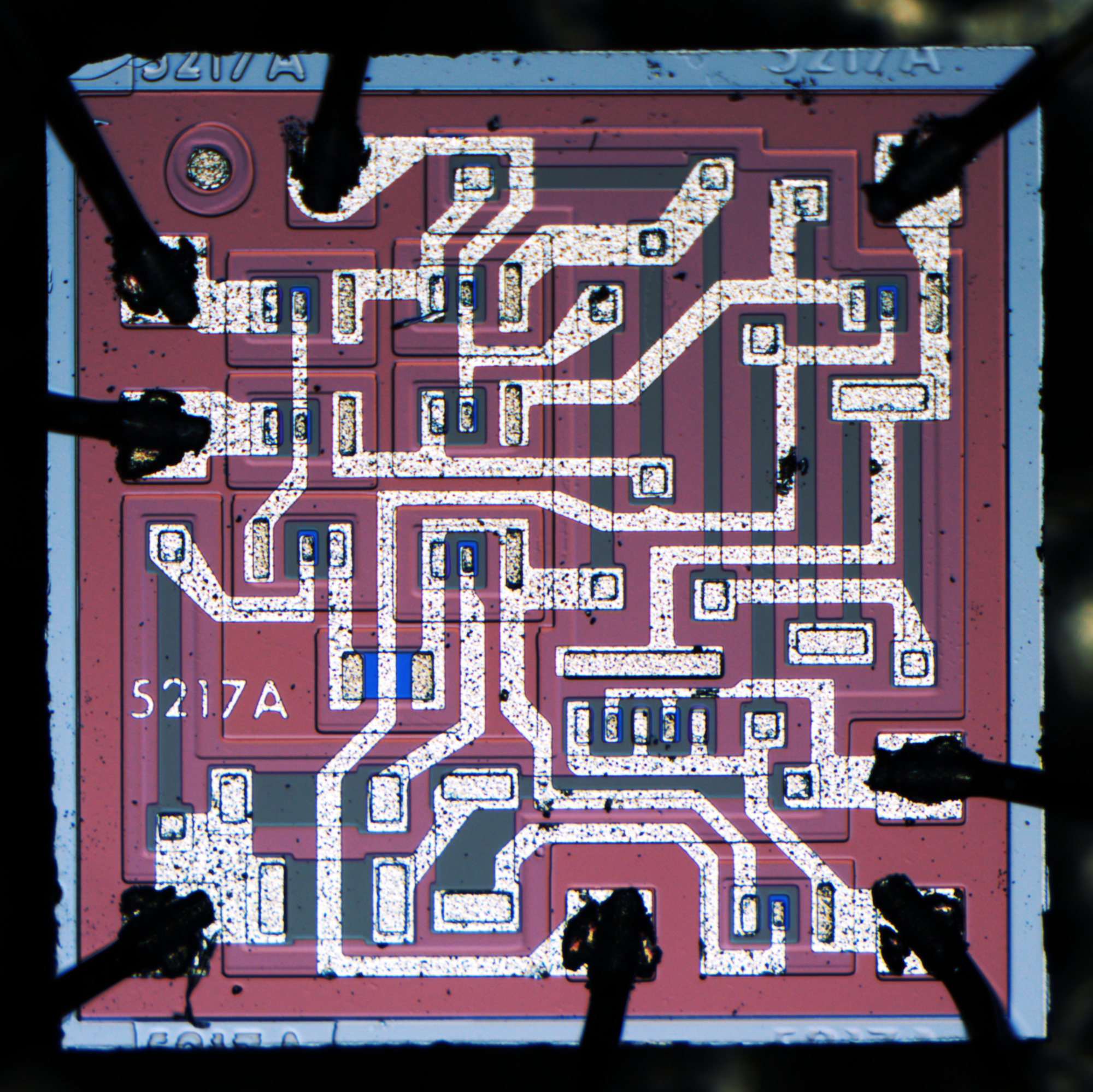 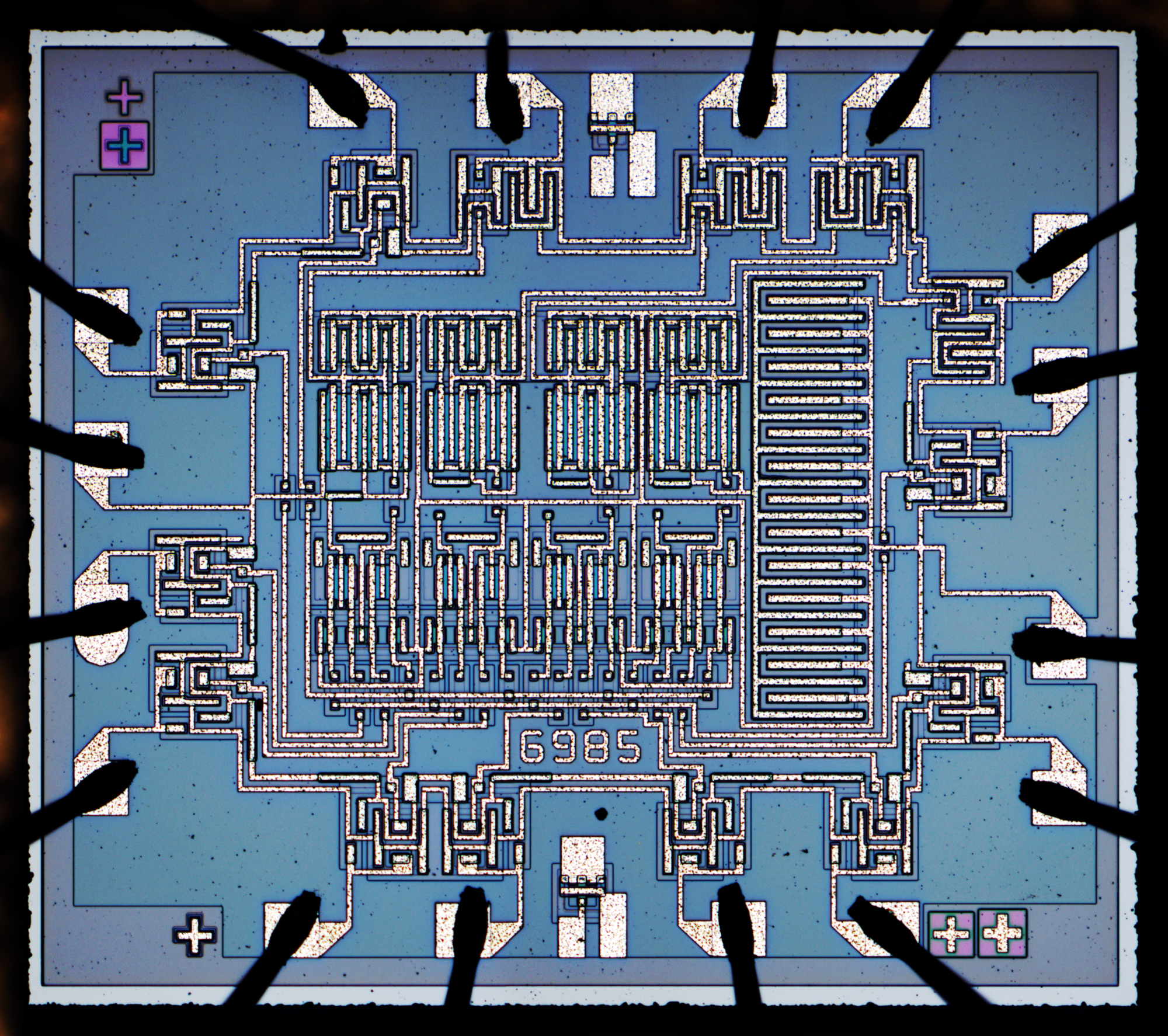 LM373 is what we could have called "Analog SOC" : most of the components one needed to build AM/FM/SSB radio transceiver.
Die size 1644x1366 µm. 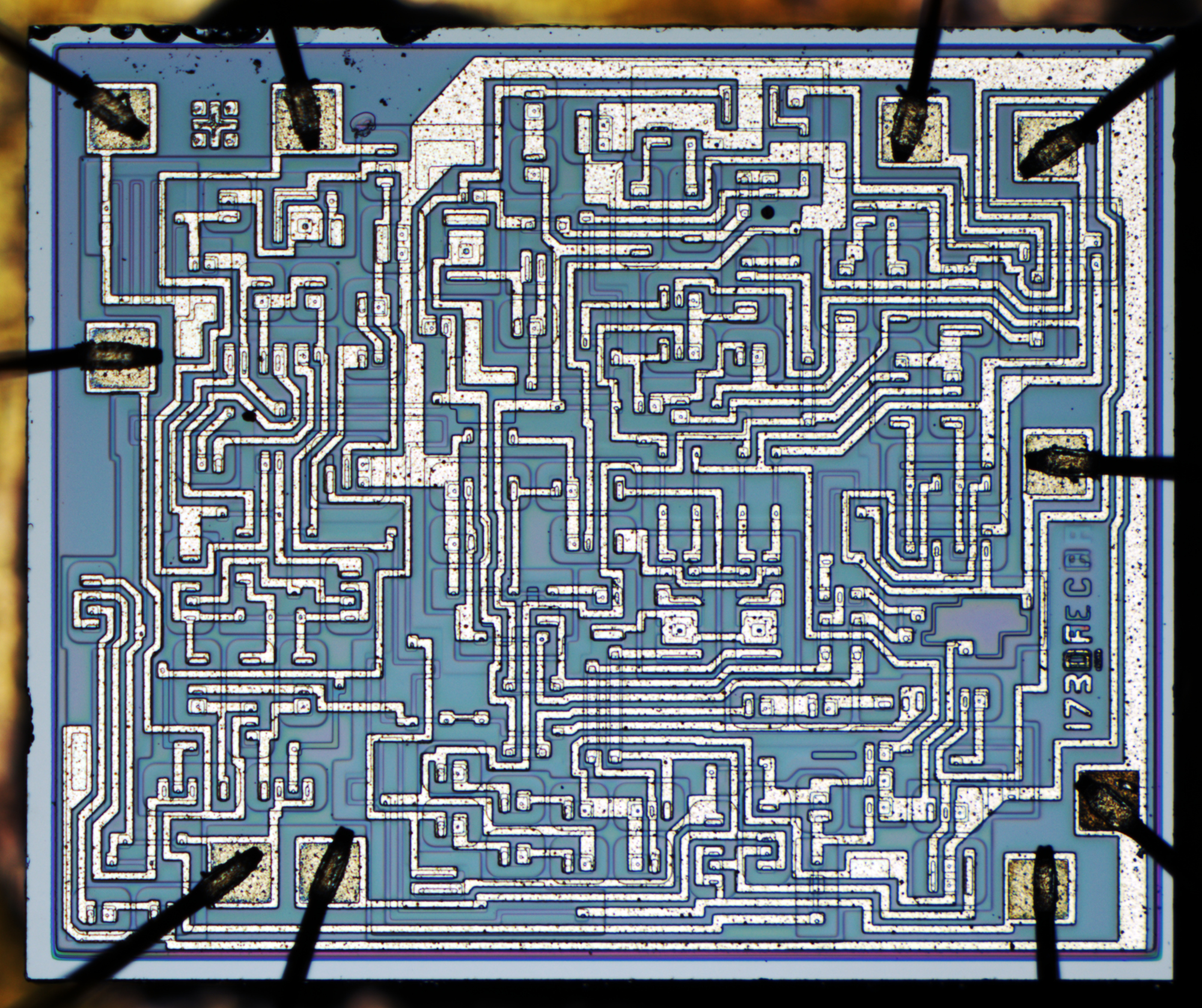 Did you know that you can make Scanning Electron Microscope to see itself? At right acceleration voltage electron beam can charge tiny dielectric sphere or plate to potential of ~30kV, at which point it starts reflecting electrons of lower energies back and allow microscope to see itself. Bright donut in the middle is backscattered electron detector (BSE, all 4 segments are enabled), tiny dark spot in the middle is output aperture where electrons are coming out. BSE detector is brightest here as it directly sees reflected electrons, everything else needs multiple reflections to hit detector.

At clock position 12 - there is energy-dispersive detector aperture, at 2 - secondary electron detector and bias electrode, and 10 - photomultiplier. 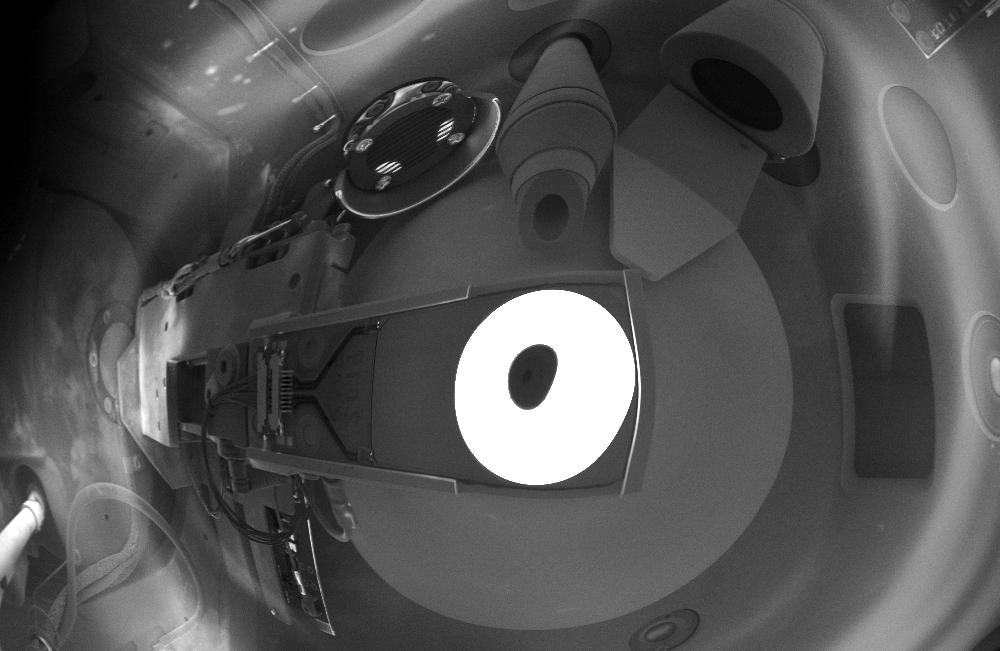 Let's see how other detectors looks like:
Read more →