Cut a small hole in the center of the chip with a dremel: 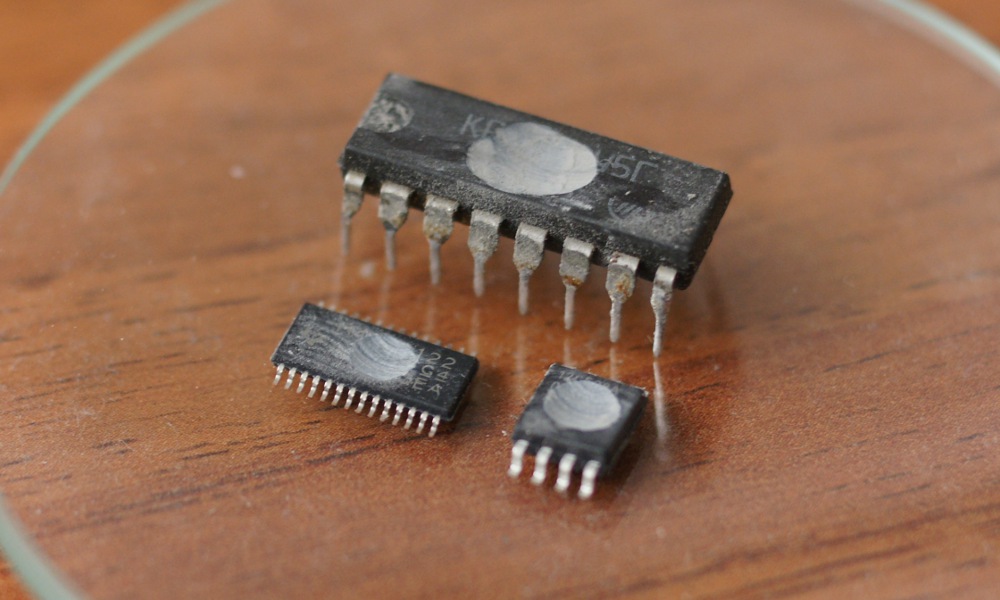 WARNING!: All operations with acids must be performed in a fume hood, with proper protection (gloves, gas mask, e.t.c).

Put a droplet of fuming nitric or sulfuric acid there, heat up to ~100 ºC (~212 ºF). It is critical to use fuming acids - just concentrated (98% sulfuric or 70% nitric) won't cut it. After reaction ends - rinse with acetone, dry and put next droplet.

As a result we are getting exposed die, with all bond wires intact. The microchip still works - this might be useful if we want to probe it or modify eeprom data with UV laser. 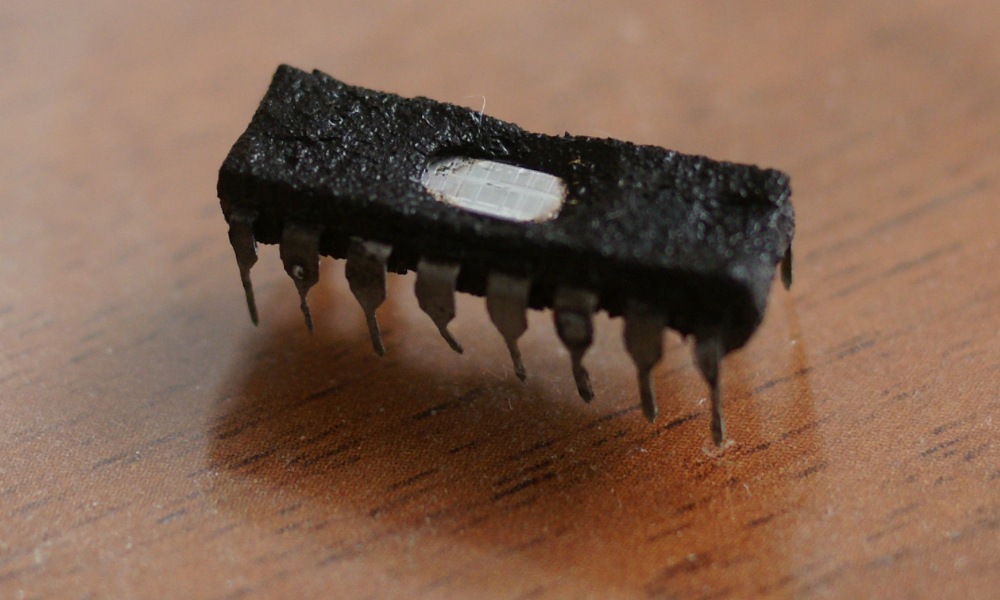 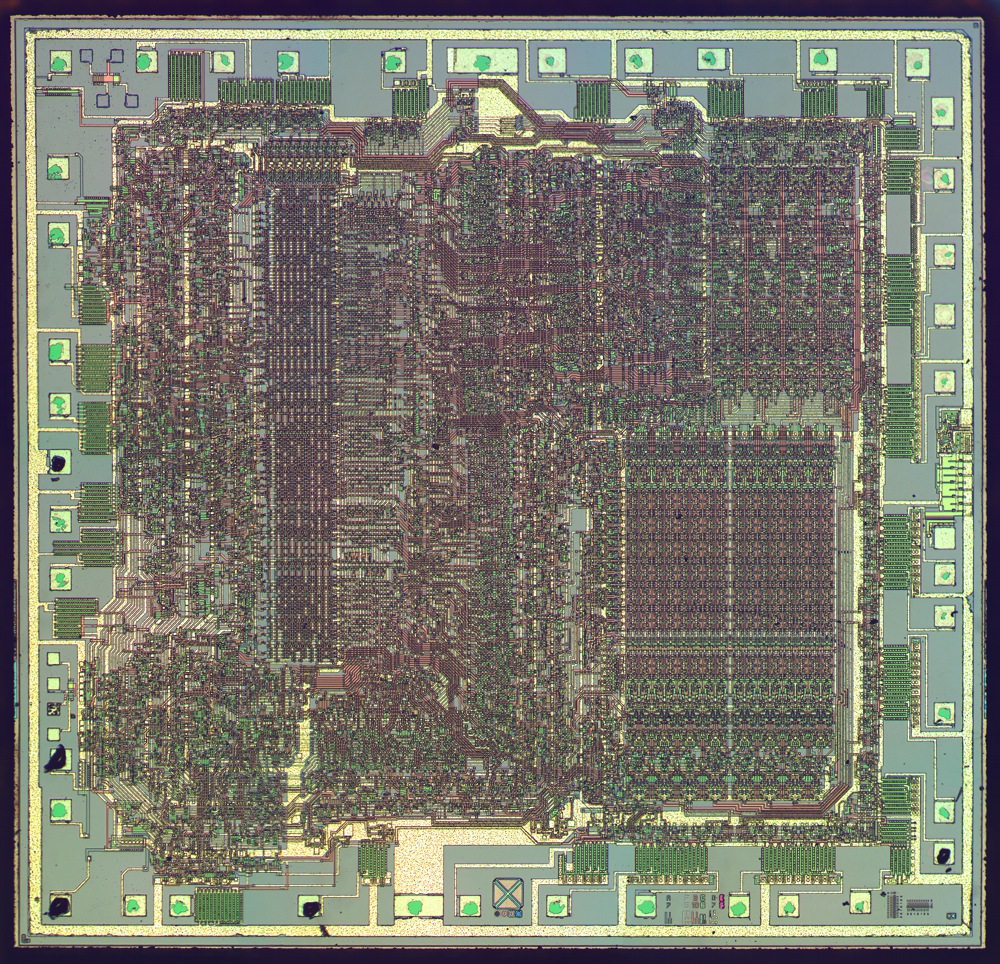 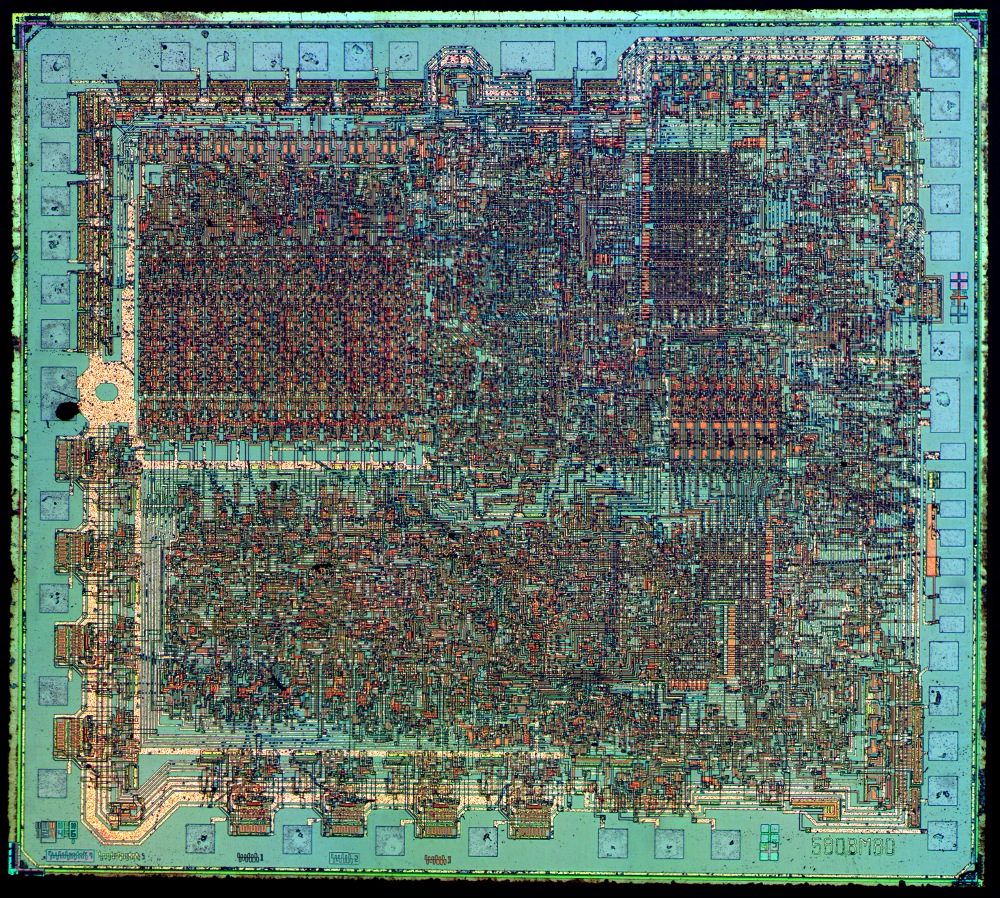 MSP430F122 - 16-bit microcontroller made by Texas Instruments. What's interesting is that die is marked as MSP430F123, with larger flash size.

PIC12C508 - one of the "old" PIC's. Manufacturing technology - 1200nm, the oldest we've seen in microcontrollers being sold at the moment. 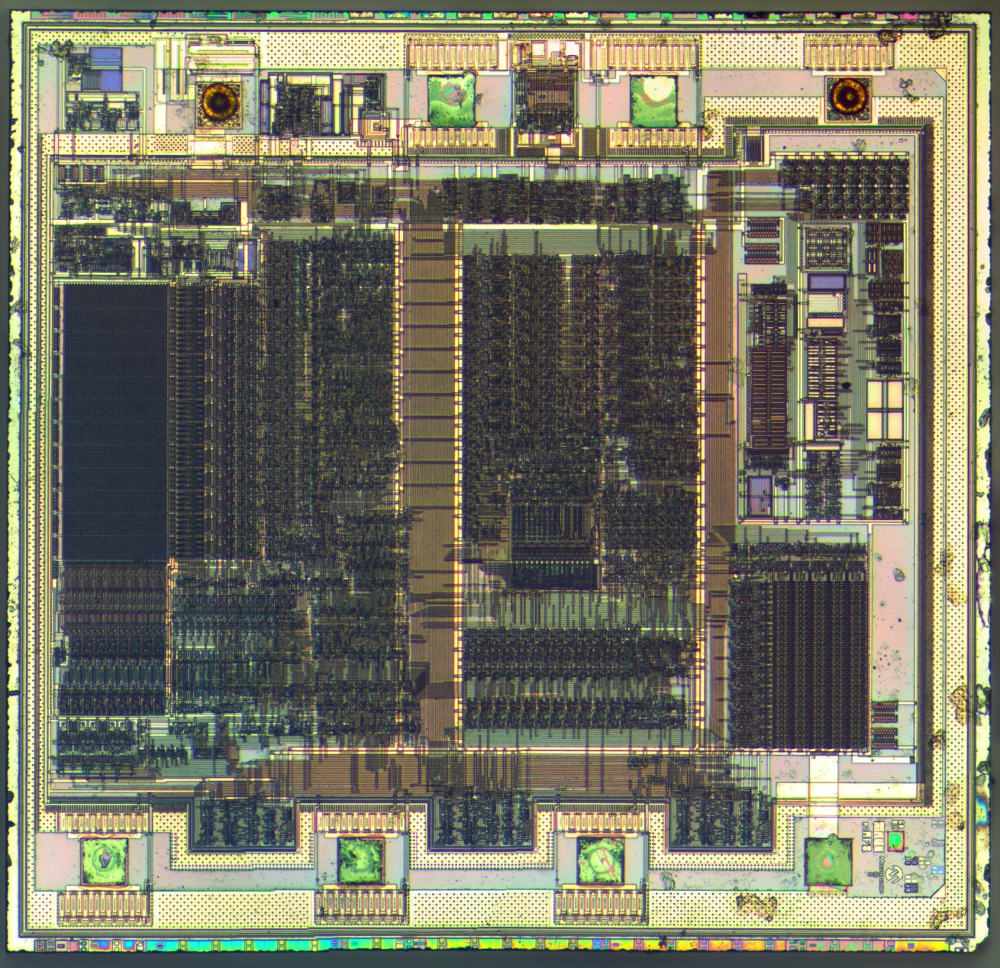 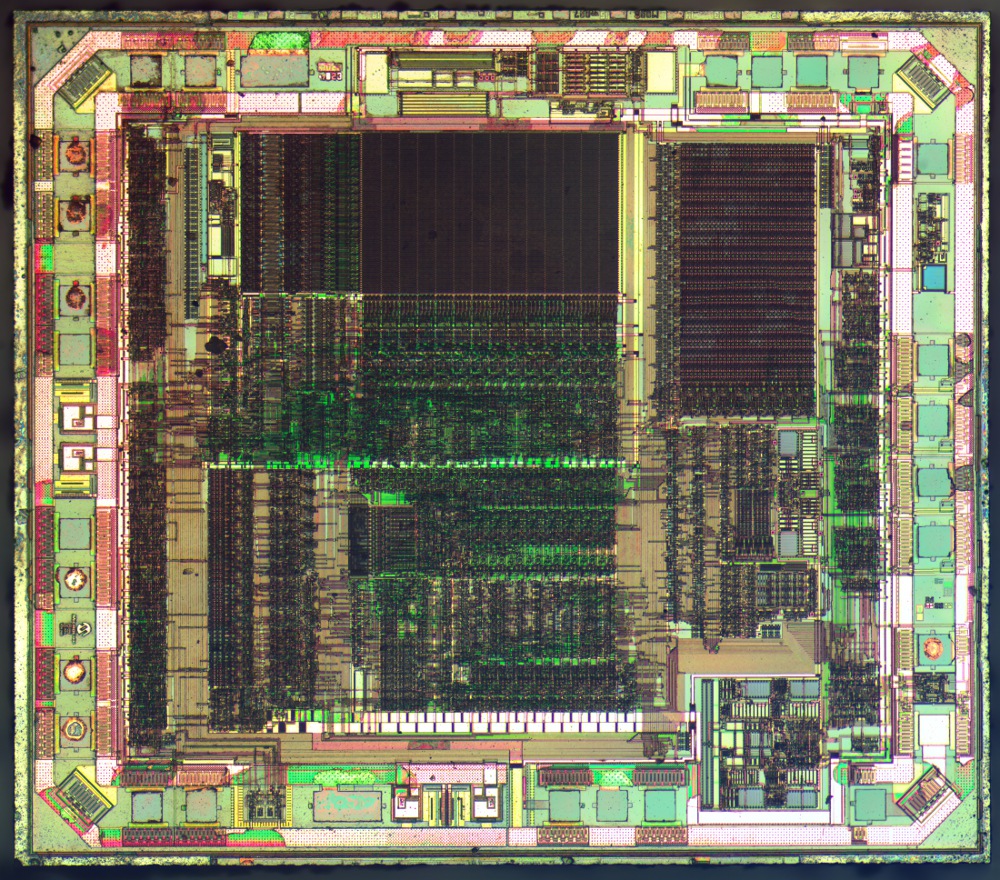 New RFID MIFARE chip from Moscow's metro - for several years Sitronics-Микрон was apparently using NXP RFID chips in Moscow's metro, but since February 2013 - we were finally able to find russian-made chips. New chip compared to NXP's one is 20% smaller, but not readable by NFC-readers in modern cell phones (might be a software issue). 180nm technology, aluminum metalization. 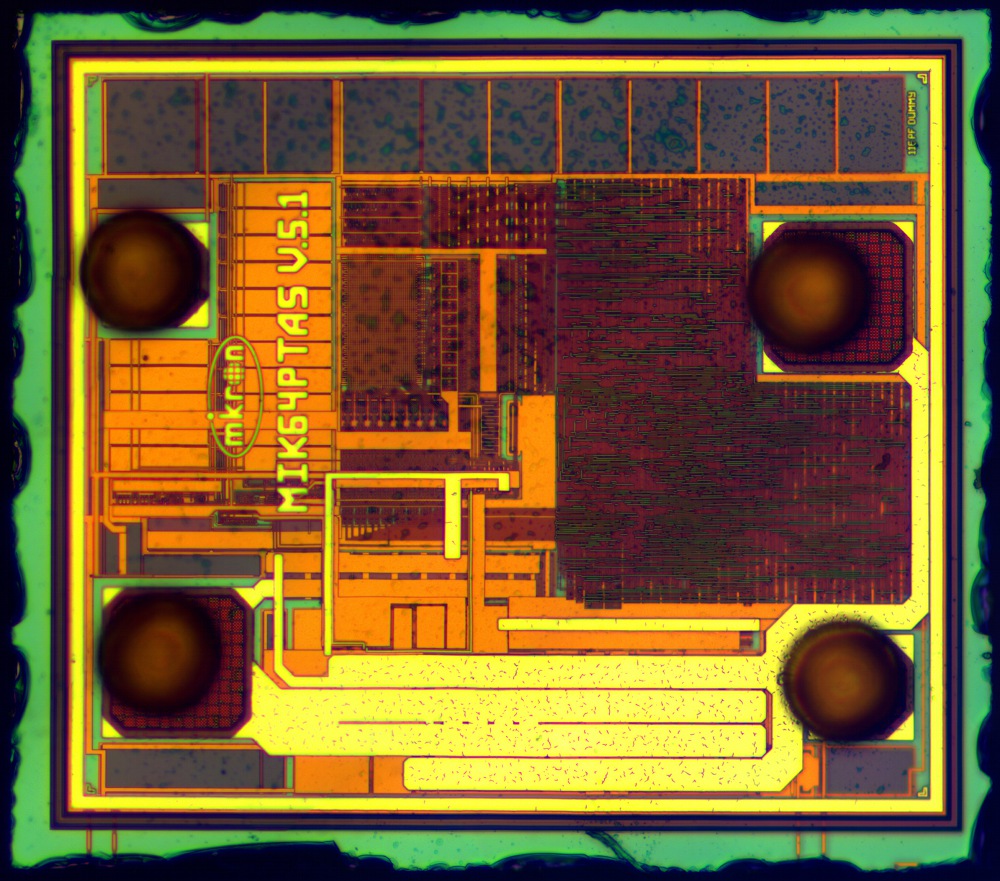 After metalization etch - it is clear that significant part of the chip is occupied by passive components (capacitors), and places under pads are empty. 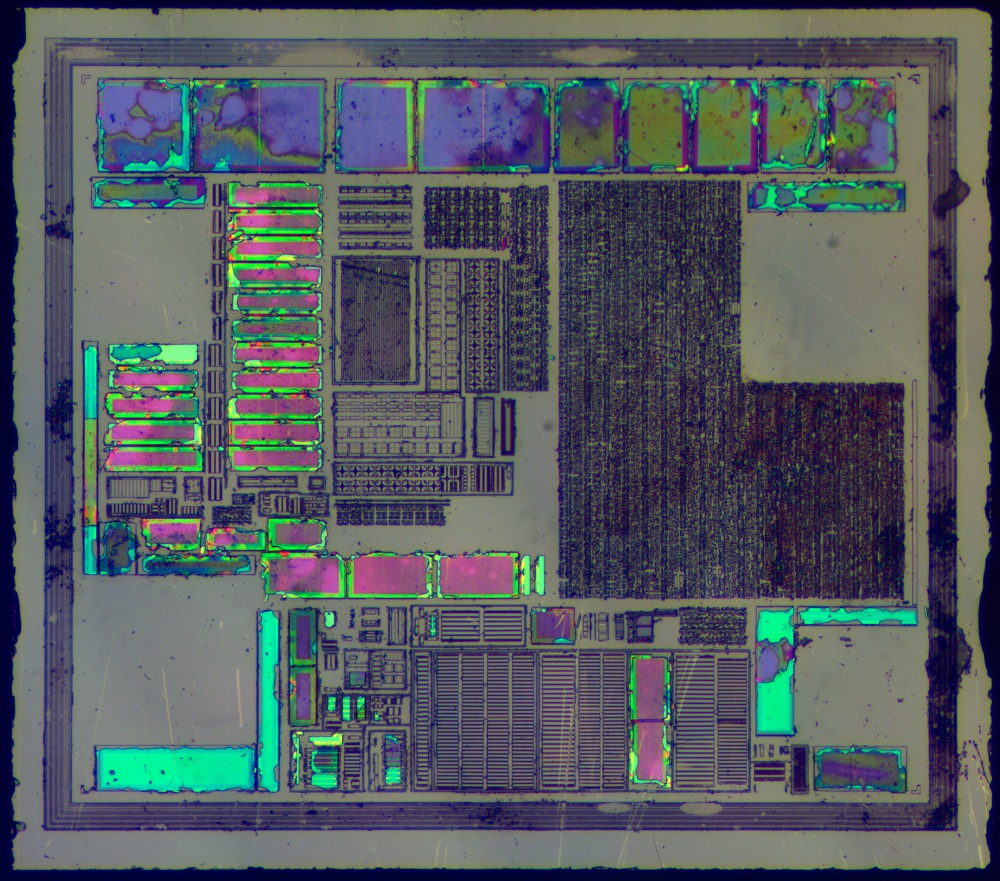 Dual timer 556 - one of the oldest chips still being manufactured. 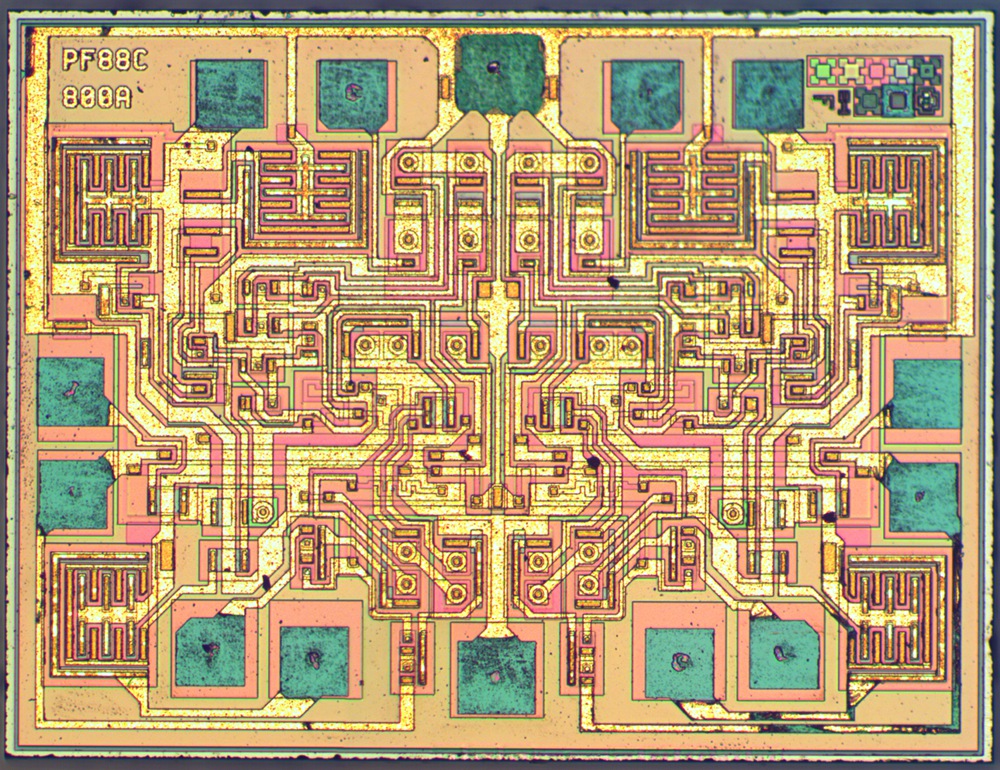 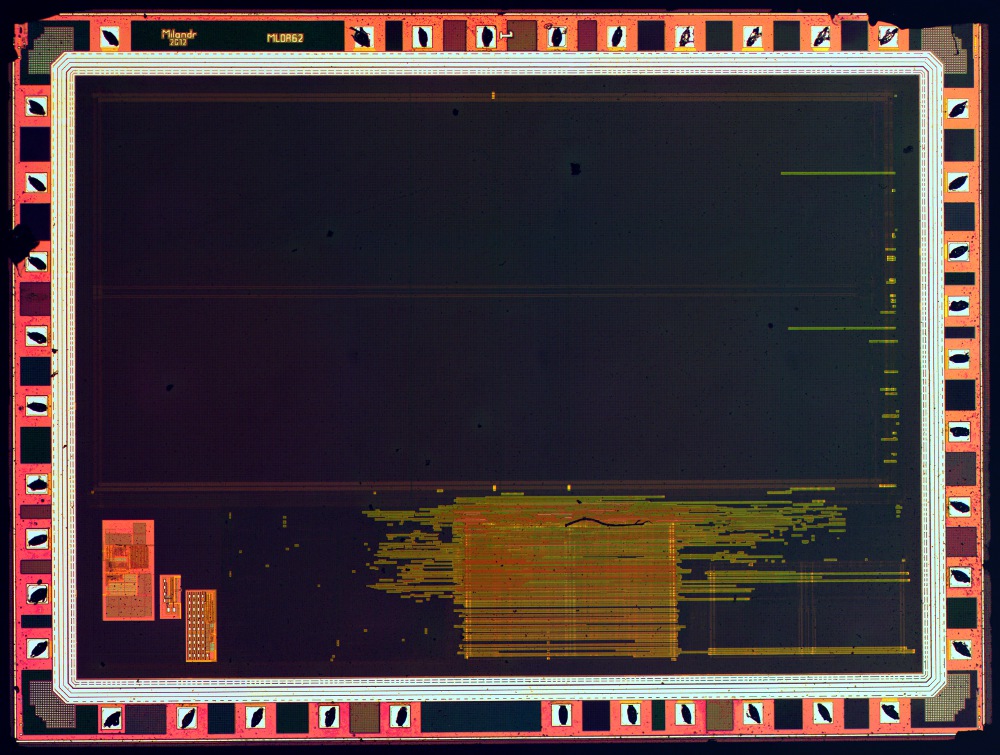 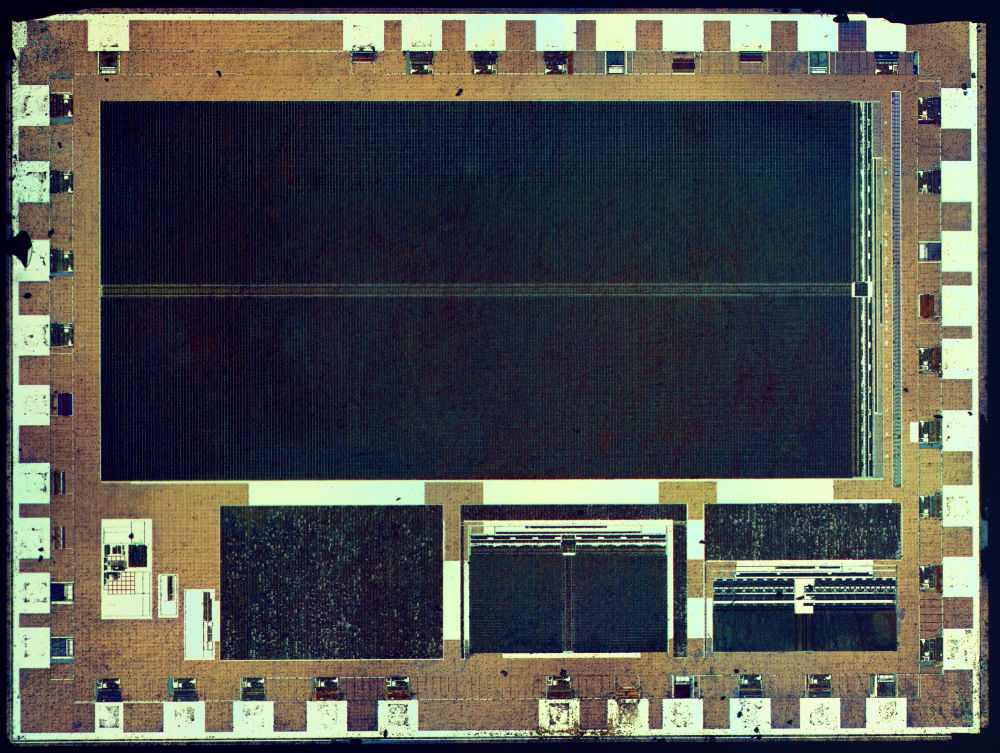 Not much to see in optical microscope: 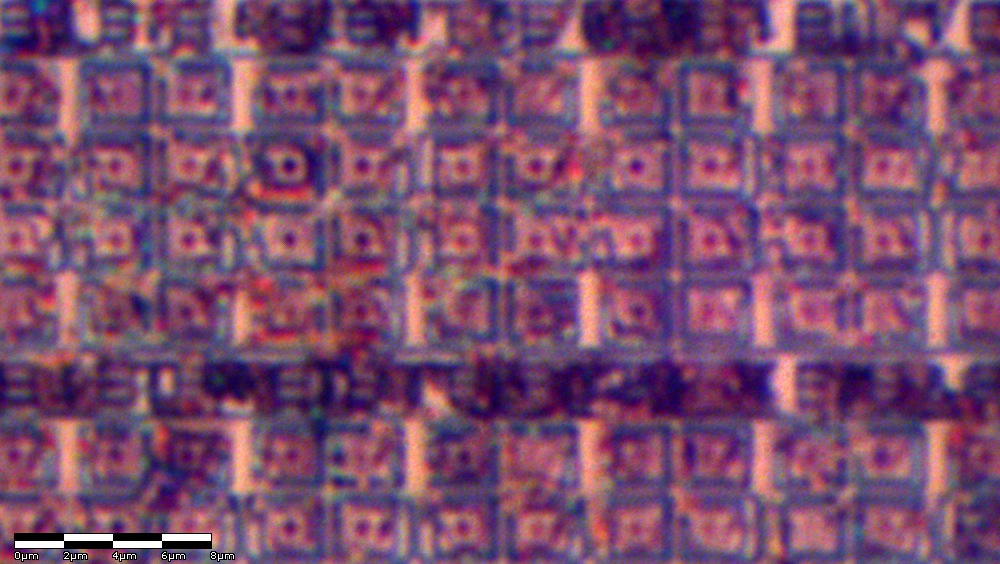 Much better via scanning electron microscope: 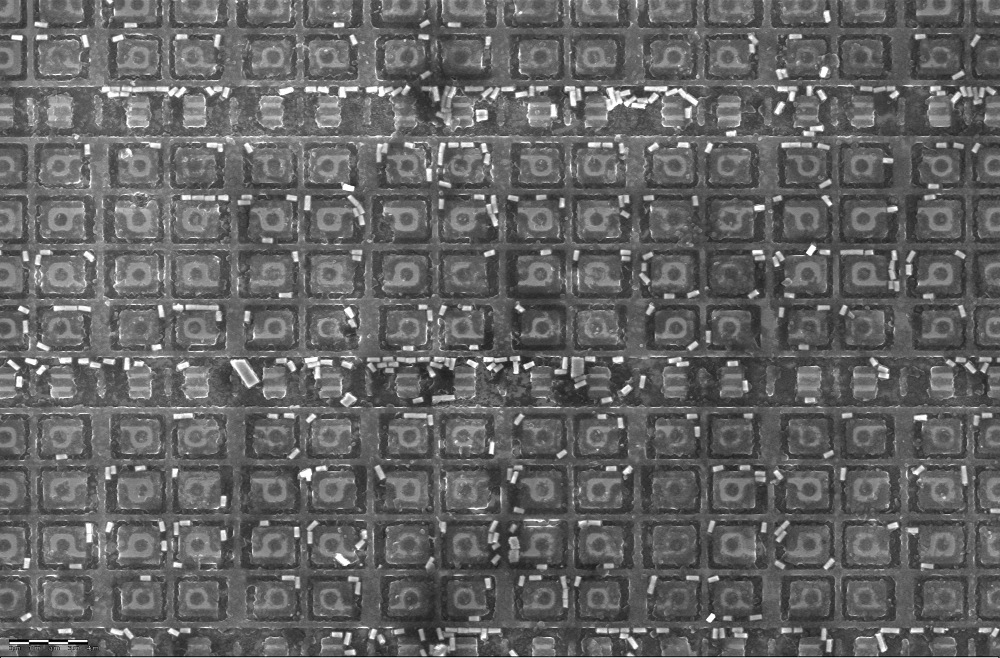 These bright cilinders - are tungsten via's left after metalization etch. This is an image from electron microprobing - sample is being bombarded by electron beam and X-Ray spectra is analyzed. 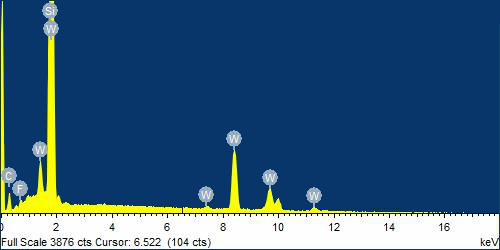 STM32 STM32F103VGT6 - one of the largest STMicroelectronics microcontrollers on Cortex-M3 core.
1Mb of flash memory and 96kb of SRAM occupies it's enormous 5339x5188 µm die. 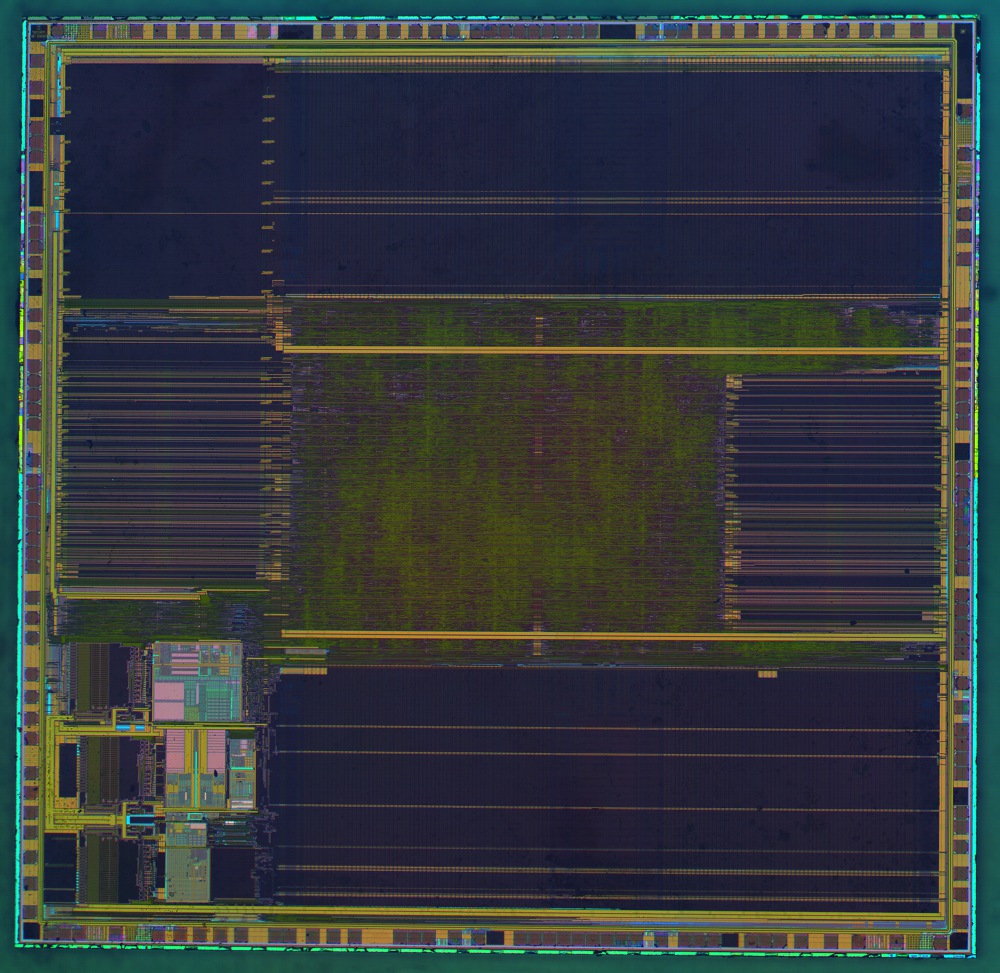 180nm SRAM is not really visible in optical microscope:

And again, electron microscope would help us: 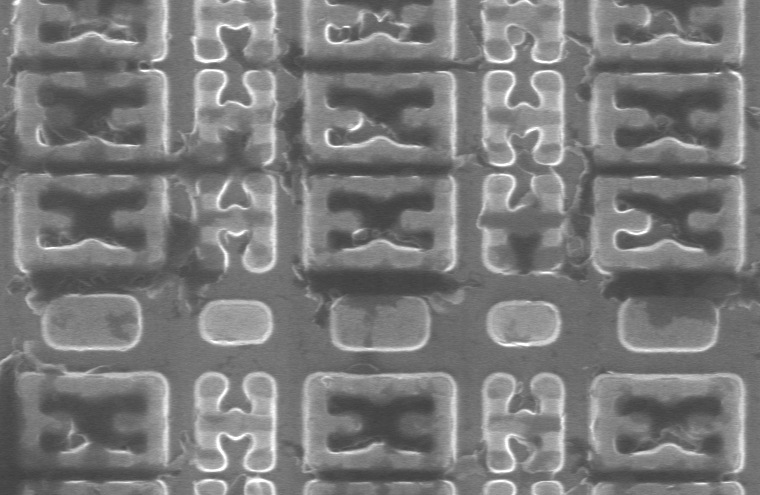 After metalization etch: (Warning, high-resolution image might kill your browser) 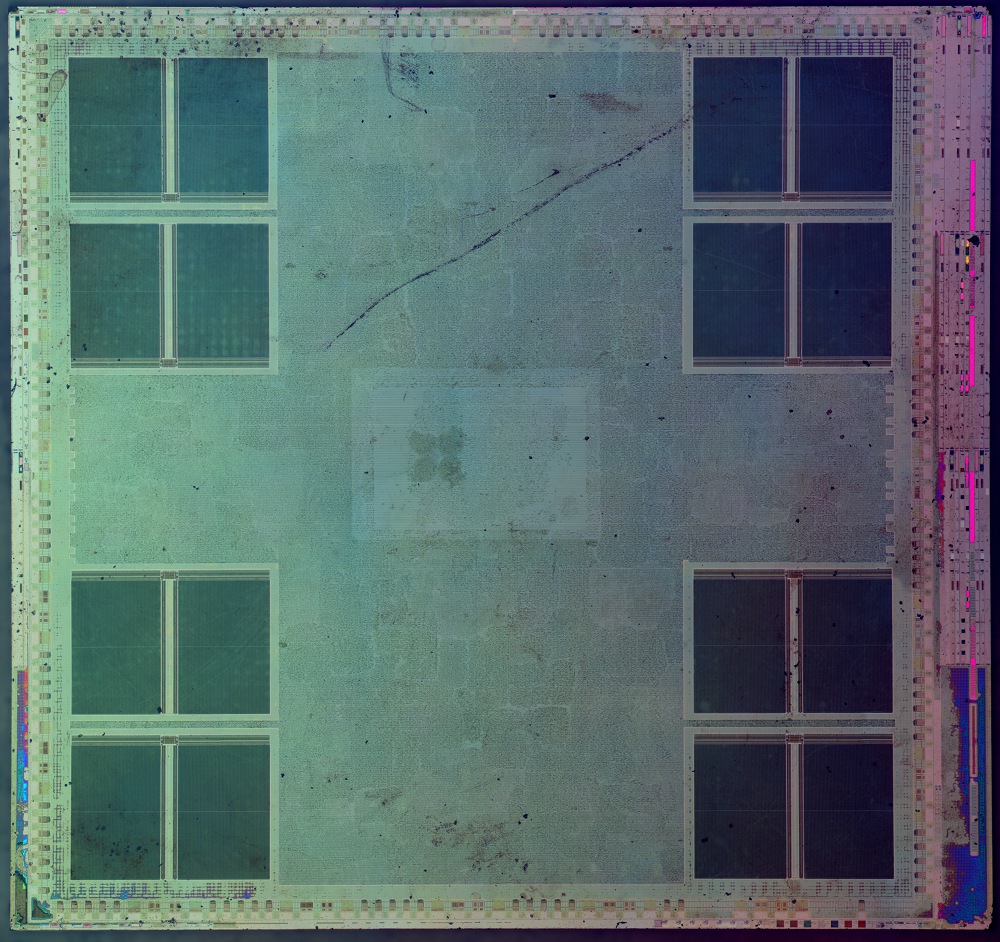 Also, testing areas were cut along with the crystal, for example here is critical dimension test : 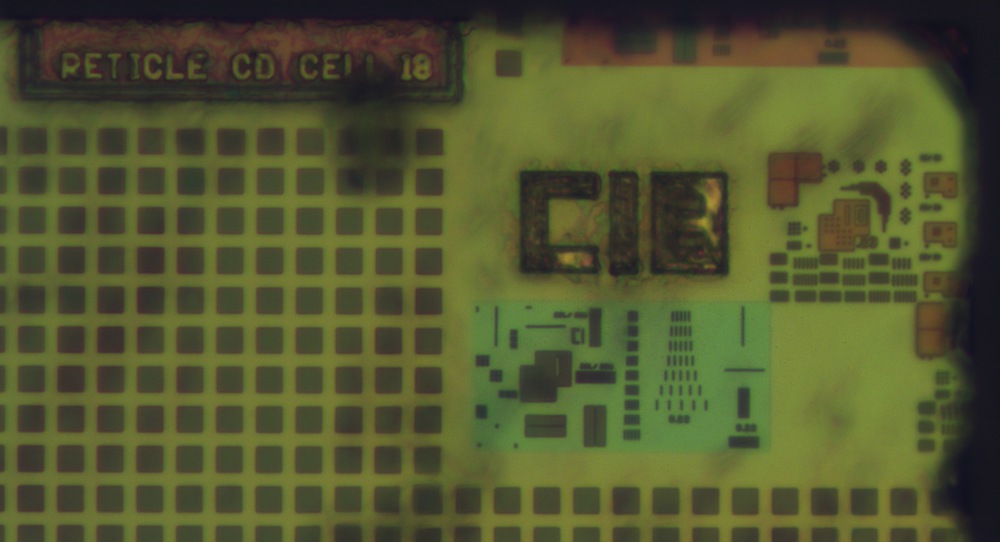